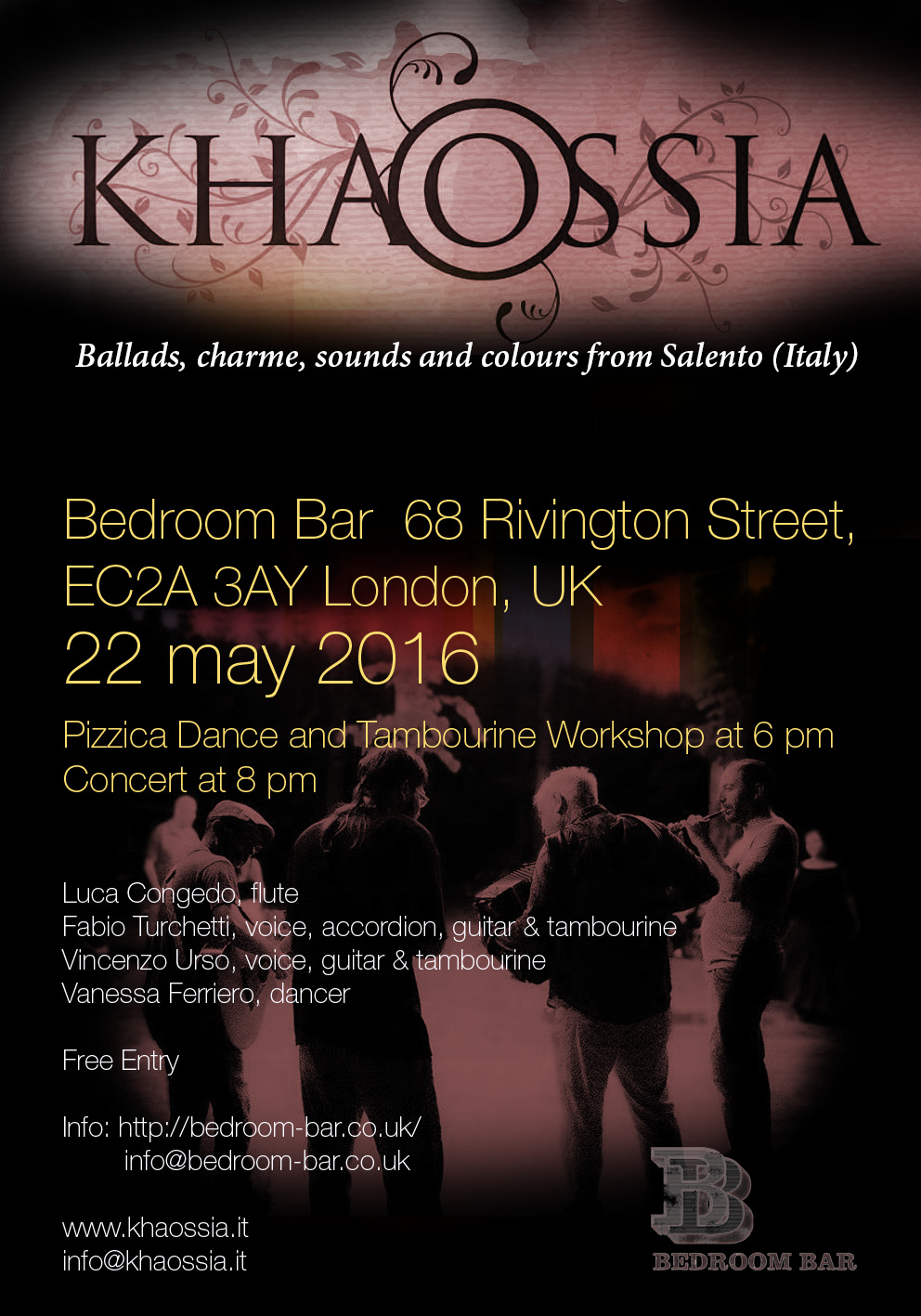 Ballads, charme, sounds and colours from Salento
Workshop & Concert
The concert is a kind of journey, with music and video, through the most famous music expressions, originally re-adapted, of Terra d’Otranto (Salento) and of other lands from the Mediterranean World. Ancient tarantelle, Pizzica-tarantata, Pizzica-pizzica (de core), Ballads of Salento, Serenate, Popular dances, Typical grecanic songs from Grecìa Salentina.

Most of the songs played by the Khaossia are music for dance: the traditional dance of Salento, called pizzica or, nowadays, taranta. This dance is linked to a local cultural phenomenon called tarantism; sometimes it is danced between woman and man, as a form of courtship.
This kind of music is passional, obsessive and conducive to trance, owing to the fact that its main rhythmical actor is a local type of frame drum, the tamburello, which resounds like a never-stopping beating heart. The power of this music is at its highest during live shows, when the audience moves and dances to the rhythm.

Salento is a crossroads with the geographical and cultural features of a free zone for trade which was not allowed elsewhere, due to political and religious reasons. Salento belonged to the Eastern Roman Empire, and after the fall of the Empire, Otranto took on a special role, which culturally benefited and enriched the people. However, by the same token, Salento is a “finis terrae”, a peninsula that in some ways is like an island.

The insular nature of Salento is testified by the fact that tarantism (a cultural phenomenon of trance and possessions) has endured to the present day in this area. It is no coincidence that the Salento dialect has morphological, phonological, and prosodic features that are entirely different from those in the rest of Puglia.

We use cookies on our website to give you the most relevant experience by remembering your preferences and repeat visits. By clicking “Accept”, you consent to the use of ALL the cookies.
Cookie settingsACCEPT
Manage consent

This website uses cookies to improve your experience while you navigate through the website. Out of these, the cookies that are categorized as necessary are stored on your browser as they are essential for the working of basic functionalities of the website. We also use third-party cookies that help us analyze and understand how you use this website. These cookies will be stored in your browser only with your consent. You also have the option to opt-out of these cookies. But opting out of some of these cookies may affect your browsing experience.
Necessary Sempre abilitato
Necessary cookies are absolutely essential for the website to function properly. These cookies ensure basic functionalities and security features of the website, anonymously.
Functional
Functional cookies help to perform certain functionalities like sharing the content of the website on social media platforms, collect feedbacks, and other third-party features.
Performance
Performance cookies are used to understand and analyze the key performance indexes of the website which helps in delivering a better user experience for the visitors.
Analytics
Analytical cookies are used to understand how visitors interact with the website. These cookies help provide information on metrics the number of visitors, bounce rate, traffic source, etc.
Advertisement
Advertisement cookies are used to provide visitors with relevant ads and marketing campaigns. These cookies track visitors across websites and collect information to provide customized ads.
Others
Other uncategorized cookies are those that are being analyzed and have not been classified into a category as yet.
ACCETTA E SALVA